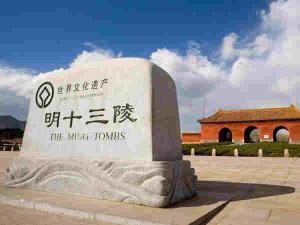 Ming Tombs, located in Changping District, about 50 kilometers from the northwest of Beijing, are the imperial cemetery of 13 Ming Dynasty emperors. The cemetery, surrounded by mountains on three sides, covers an area of 120-plus square kilometers. Winding creek also can be seen in front of the cemetery, making it an impressive attraction. The 13 tombs are all built under mountain foot in the east, west and north and has become a grand and magnificent mausoleum complex. The first tomb known as Changling was to bury the Yongle Emperor (1409) and the last tomb known as Siling was to bury the Chongzhen Emperor of the Ming Dynasty. There are altogether 13 tombs that were built during a period of 230 years and buried 13 Ming Dynasty emperors along with 23 empresses, 2 princes, more than 30 concubines and one eunuch. These tombs are the best preserved Chinese imperial tombs and have been nominated by UNESCO as world cultural heritage.

Ming Tombs are well-preserved Chinese imperial tombs in China. In 1957, the Municipal Government of Beijing listed Ming Tombs as the first batch of key units of ancient cultural relics to be preserved. In 1961, Ming Tombs were listed as national key units of cultural relics. In 1982, the State Council announced Badaling Great Wall and Ming Tombs to be two of the 44 key scenic spots to be protected. In 1991, Ming Tombs were proclaimed to be one of “China’s 40 best tourist destination” by the National Tourism Administration. In 1992, the tombs were named as “the world’s largest intact burial Emperor Tombs” by the rating committee of “the world top tourist attractions in Beijing”.