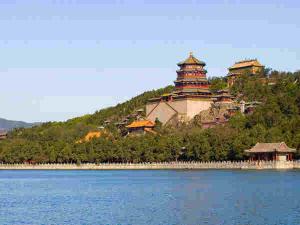 The Summer Palace represents the largest and best-preserved existing imperial garden in China and one of the four famous gardens (the other three are the Chengde Imperial Summer Resort in Hebei, the Humble Administrator's Garden and the Lingering Garden in Suzhou). The Summer Palace, situated in Haidian district, 15 kilometers from the city proper, covers an area of 290 hectares, three quarters of which is water. It has become a huge natural landscape garden with the Kunming Lake and the Longevity Hill as the base and the West Lake in Hangzhou as the blueprint. It is also crowned as the imperial garden museum. Originally, it was the imperial palace and garden for brief stays and was called the Garden of Clear Ripples. It was the last garden constructed among the three hills and five gardens (the three hills are the Longevity Hill, the Fragrant Hill and the Yuquan Hill; the five gardens are the Garden of Clear Ripples, the Jingyi Garden, the Jingming Garden, the Changchun Garden and the Old Summer Palace). The construction of the Summer Palace began in 1750 and was completed in 1764. Before Emperor Qianlong succeeded to the throne, a large imperial garden complex had been constructed in Western Suburb of Beijing, but the gardens were separated and were lack of organic connection, and there was an open field in between.

After the founding of the New China in 1949, the Summer Palace has been renovated for many times under the support of government allocation. It was announced to be the first batch of national key cultural relics to be preserved on March 4th, 1961 and was included in the World Heritage List in November 1998. On May 8th, 2007, it was officially announced to be a national AAAAA-level tourist attraction by the National Tourism Administration. In 2009, it was selected as the largest existing imperial garden by China World Record Association.