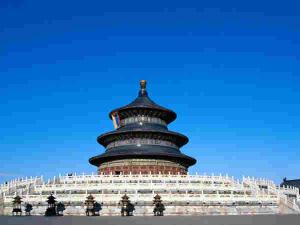 The temple complex was constructed during the reign of Emperor Yongle of the Qing Dynasty (1420). It has become a grand and magnificent complex after its extension under the reign of Emperor Jiajing of the Ming Dynasty and its renovation under the reign of the Emperor Qianlong of the Qing Dynasty. After the founding of the New China (1949), the central government has put in a great deal of financial resources for its preservation and maintenance. Through the ages, the temple complex, situated in the Southeastern part of Beijing, has turned out to be the portrait of the ancient oriental civilization with its profound cultural connotation and magnificent architectural style. It served as a complex of sacrificial buildings for the Ming and Qing emperors and symbolizes the relationship between Earth and Heaven to strengthen Confucian social estate system. It was listed as a “National-Level Cultural Relics Preservation Unit” by the State Council in 1961 and the “World Cultural Heritage” by the UNESCO in 1998. In 2009, it was listed as the largest existing complex of ancient sacrificial buildings in China by the China World Records Association.